Mount Nebo is the place where Prophet Moses was given a look at the promised land he’d never be allowed to enter. The mountain is 817 meters (2680 ft) above sea level. While standing atop the summit, it is possible to see the Jordan Valley, the Jordan River, Jericho, and on a clear day, even Jerusalem.

“And Moses went up from the plains of Moab unto the mountain of Nebo, to the top of Pisgah, that is over against Jericho. And the Lord shewed him all the land of Gilead, unto Dan… And the Lord said unto him, This is the land which I sware unto Abraham, unto Isaac, and unto Jacob, saying I will give it unto they seed: I have caused thee to see it with thine eyes, but thou shalt not go over thither.” (Deuteronomy 34:1, 4)

Ark of the Covenant, hidden by Jeremiah at Mount Nebo

Prophet Jeremiah was at Mount Nebo, too. He hid the tabernacle and the Ark of the Covenant there.

“It was also in the writing that the prophet, having received an oracle, ordered that the tent and the ark should follow with him, and that he went out to the mountain where Moses had gone up and had seen the inheritance of God. And Jeremiah came and found a cave, and he brought there the tent and the ark and the altar of incense, and he sealed up the entrance. Some of those who followed h im came up to mark the way, but could not find it. When Jeremiah learned of it, he rebuked them and declared: ‘The place shall be unknown until God gathers his people together again and shows his mercy.’” (2 Maccabees 2:4-7)

In 1933 the ruined remains of a church were discovered at the summit (Syagha). Six tombs had been dug into the rock beneath the mosaic floor. The church, which was built to commemorate Moses’ death, dates back to the 4th century CE. Beautifully intricate mosaic floors decorate the church and can still be seen today. Presently, the church is undergoing archaeological research and restoration. Hopefully, it will soon be ready again to receive visitors. 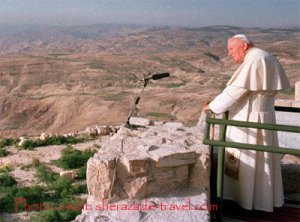 Mount Nebo has received two papal visits; Pope John Paul II in 2000 and Pope Benedict XVI in 2009. Pope John Paul planted an olive three beside the chapel while he was here. 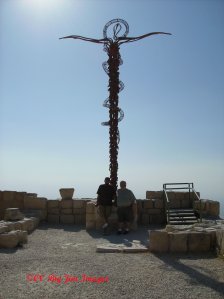 The serpentine cross with yours truly and Zeek

An elegantly rendered serpentine cross sculpture, by Italian artist Giovanni Fantoni, was erected near the church. It symbolizes the bronze serpent created by Moses (Numbers 21:4-9) and the cross upon which  Jesus was crucified (John 3:14).

There are 1,776 bloggers signed up for the A to Z Blogging Challenge. Why not go over and check a few of them out? I can absolutely guarantee you won’t be disappointed!