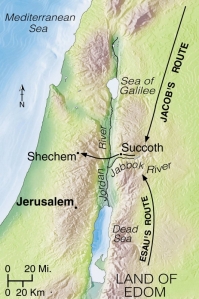 A few days ago, I told  you the story about Jacob leaving Mesopotamia to make things right with his brother, Esau. Here’s the rest of the story…

The Masoretic Text, the authoritative books of the Jewish canon, tells the story thusly:

MT 32:22 says, “The same night he arose and took his two wives, his two female servants, and his eleven children, and crossed the ford of the Jabbok. He took them and sent them across the stream, and everything else he had. And Jacob was left alone. And a man wrestled with him until the breaking of the day. When the man saw that he did not prevail against Jacob, he touched his hip socket, and 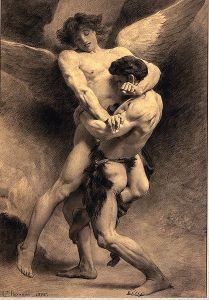 Jacob’s hip was put out of joint as he wrestled with him. Then he said, ‘Let me go, for the day has broken’. But Jacob said, ‘I will not let you go unless you bless me’. And he said to him, ‘What is your name?’ And he said, ‘Jacob’. Then he said, ‘Your name shall no longer be called Jacob, but Israel, for you have striven with God and with men, and have prevailed’. The Jacob asked him, ‘Please tell me your name’. But he said, ‘Why is it that you ask my name?’ And there he blessed him. So Jacob called the name of the place Peniel, saying, ‘For I have seen God face to face, and yet my life has been delivered’. The sun rose upon him as he passed Penuel, limping because of his hip. Therefore to this day the people of Israel do not eat the sinew of the thigh that is on the hip socket, because he touched the socket of Jacob’s hip on the sinew of the thigh.” (See also, Genesis 32:22-31)

The word Peniel, and its variant Penuel, means face of God. 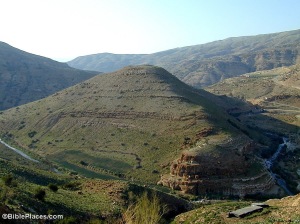 The book of the prophet Hosea tells the story again (Hosea 12:3-4), and if the identity of the wrestler is unclear in Genesis, the prophet does nothing to clear it up. In verse 3 he said that Jacob struggled with God and in verse 4 he says that he struggled with the angel.

Some folks say the man was the Archangel Phanuel. Enoch ranked him fourth in the hierarchy after Michael, Raphael, and Gabriel. In 1 Enoch 40, he is said to be an angel of exorcism. Morton Smith, in his book Christianity, Judaism and Other Greco-Roman Cults says he was God in an angelic form. 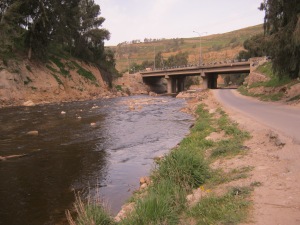 Recently, I was down in the area where the ‘wrestling match’ occurred and managed to get a picture in anticipation of this blog post. Of course, the Jabbok isn’t nearly the river it used to be. Overuse of the water resources and years of pollution have severely damaged it. The good news is that a massive cleanup and restoration effort is now underway, thanks to the Royal Society for the Conservation of Nature.