Note: Since the beginning, I haven’t been very satisfied with the names of some of my characters. So, since this is my world, I changed them.

And now, on with the story. 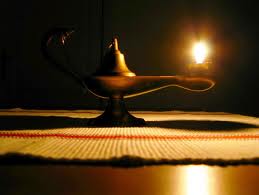 The move-in date was getting closer and closer and the house still needed a lot of work. Another day would see the painting finished and then we could get on with the general cleanup, window-washing and all the other minor details that need to be done before the furniture arrives.

I couldn’t give the painting full concentration. My mind kept returning to the rooms below me. I badly wanted to drop my brush and get back down there to solve the riddle of Mysterious Mustafa as I had come to think of him. Why was he down there? How does he come and go? No amount of speculation would give me reasonable explanations. Nader wasn’t doing any better. Every few minutes he would pop his head into the room I was painting with another idea.

The sun was low in the sky when the last of the painting was finished. Nader and I lay on the cool stone floor, resting from our labors.

“Rafiq will probably be over here soon to see if he can help with anything.”

Nader continued to gaze at the ceiling so long I began to wonder if he heard me. He took a long drag of his cigarette and watched the smoke form swirls and eddies in the breeze that wafted through the house. At long last, he spoke.

“Do you think we should tell him about Mustafa?”

“Think about that for a minute. Rafiq would go mad trying to find out anything about him. Not only that, he would drive us mad in the meantime! I think we should keep this completely between us for now. You know if we tell even one person, all Jabal al Taj will know about it before the call for evening prayer.”

Don’t misunderstand, Gentle Reader, we adore Rafiq. Good times or bad, he is at our side offering help. He’s a good friend who would follow us to the ends of the earth. At the same time, he can be stubborn and willful and we would be plagued with questions, suggestions and even demands to see what we’d found. No, it was definitely better to keep this under wraps for the moment and the only way to do that was to limit the number of people who knew about it.

“Three days have passed since I first went down. Let’s have a shower and get into some clean clothes and pay Mustafa a visit before Rafiq and the others begin coming home for the evening.”

Nader leapt up from the floor and offered his hand to help me stand. As we wandered into the master suite I reflected how I love taking a shower knowing the sun warmed our water. One of the things we had both agreed and insisted on was the installation of solar panels on the roof to offset the steadily rising electricity costs.

Clean, freshly dressed, and perfumed we headed to the office to open the stair door. Nader’s touch of the appropriate shelf was rewarded by the muted hum and whir of the ancient machinery as the door opened and the shaft beckoned. I was excited at the prospect of introducing Nader to Mustafa, and hopefully learning more about our mysterious subterranean neighbor.

“Marhaba!” The familiar voice stopped us in our tracks. I’d quite forgotten we’d left the front door open to admit a cooling breeze. I could hear Rafiq’s footsteps in the passageway, no more than 3 meters from the office door. Getting out of the stair and closing the door before he got inside was impossible!

I shot a look at Nader who responded with an extravagant shrug, as if to say ‘what can I do?’ Rafiq was the last person in the world I wanted in on our little secret adventure!

“Mister Paul, Nader, wein entoo (where are you)?” And he burst through the door with a huge smile, carrying a bag of food for our evening meal.

“I know you are too tired, so I bring falafel sandwiches for you! I have also French fries and…”

His voice trailed off as his eyes widened. He looked from the doorway to Nader to me, speechless.

Nader strode quickly across the room and greeted Rafiq. He tried to gently guide our curious friend out of the room, but Rafiq craned his neck to see what was beyond the open doorway.

“Wait! Wait, just one minute! I didn’t see this door until now. There is another room?”

He struggled against Nader’s grasp. It was clear we weren’t going to be able to keep this from him. Somehow though, we needed to make him understand that absolutely no one else hear about it. For the time being, at least.

We gave him an abbreviated version of recent events. As I described the rooms I’d visited already, he became more and more animated. Several times he tried to interrupt me with questions and I waved them off, anxious to finish the story and get down the stairs. When I described my meeting with Mustafa he listened, slack-jawed. For the first time since I’d met Rafiq, he was speechless. He didn’t remain in his unaccustomed state for very long, though.

Nader was becoming impatient. “Rafiq, we don’t know anything more than we’ve told you! I haven’t even been down yet, so shut up and let’s go!”

Rafiq, though, wasn’t about to be rushed. His earlier enthusiasm had been replaced by something else. Was it fear? I watched his face carefully as he attempted to speak again. His eyes darted back and forth between us and the doorway. Sweat beaded his forehead.

“I think it is not safe to go into that place! He is very dangerous man, I think! Please Mister Paul, Nader, close that door and forget about it. He is bad man. I am so sure about that.”

I had reached the end of my patience with him. A quick glance at Nader confirmed he was nearing the end of his own rope. I mustered my most stern voice as I returned my fullest attention.

“Rafiq, just shut the hell up! If you’ve decided you don’t want to go, just take yourself back home and let us be about our business. Either way, Nader and I are going down that stair, and we are going right now.”

“God be with you! I will not go, but I will not go home, too. I will wait for you here and pray you will come back safe.”

Nader grasped my hand to steady my steps as we descended the darkness. The flashlight guided us but as before, the darkness seemed to consume the light and we could see only a few steps beyond our feet.

The darkness felt like a physical presence as it enveloped us like a heavy woolen blanket. My breath became more labored. Dammit, I was getting a case of nerves!

“I’ll kick Rafiq’s ass when we get back home!”

My Companion stopped and looked at me in surprise.

“Thanks to him and his ‘he is bad man’, ‘he is very dangerous man’, I’m getting nervous about coming down here!”

Nader opened his mouth to speak, but stopped as the door swung open to reveal a smiling Mustafa, dressed exactly as he had been on my previous visit. Could he possibly have known we were coming today? We had only just made the decision less than an hour ago and my promise to visit again was very vague as to time.

“You are welcome! Please come in!”

We entered the guest salon and waited for Mustafa to close the door. After I introduced Nader, Mustafa greeted him profusely as if he had known him for years.

“Please, let’s go into the guest salon for some refreshment. I have some of your favorite sweets prepared. We will visit and get to know each other better.”

We followed him down the dim passageway and I began to grow more uneasy with every step.